First off, if you're in or around Ann Arbor, Michigan, anytime soon, I'll have some pieces up in the "First Contact" Art show at the Gallery Project. Here's the blurb from them: 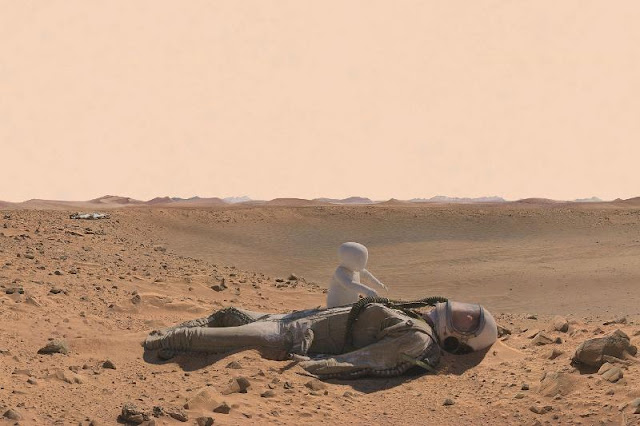 "Gallery Project presents First Contact, a multimedia exhibit in which 33 regional, national, and international artists explore our desire to encounter extraterrestrials, our preparedness for such an event, the event itself, and its possible consequences.

Technological development has brought us to the precipice of first contact, but has humanity kept pace? Is our search for extraterrestrial life simply a search for answers to our own existence? What makes us believe that we are prepared for a relationship with other worlds when we have difficulties on our own planet? Is it our innate curiosity or primal fear that motivates us? 'Artists," wrote Ezra Pound, "are the antennae of the race." Media analyst Marshall McLuhan expanded on that idea when he wrote, "Art as radar acts as an 'early alarm system,' as it were, enabling us to discover social and psychic targets in lots of time to prepare to cope with them." If art is an 'early warning system,' then what does art about First Contact foretell?
Contributors include Seder Burns, Thomas Carey, Ross Carlisle, John Causland, Debra Davis, Lynda Davis, Rocco DePietro, Zeek Earl, H.R. Giger, Brad Gieske, Clifton Harvey, Mayumi Haryoto, Dan Hernandez, Nicholas Kahn, Tanya Kavakoza, Charles Lindsay, Kevin Margo, Ian Moersen, Gloria Pritschet, Simon Roy, Michael Rea, Kris Rudolph, Richard Selesnick, Sara Schleicher, Douglas Scobel, Brian Spolans, Derek Stenning, Po-Wei Su, Mike Tarr, Jacob Tebbe, Brana Vojnovic, Lynn Whitney, and Barry Whittaker.

The exhibit is curated by Seder Burns, Lecturer of New Media, University of Toledo, and Gallery Project collaborator. "

It looks like it'll be an amazing show, and I'm sad that I won't be able to attend in person. More information can be found at the gallery's site here.

But secondly, where I WILL be in person is the Emerald City Comic Convention! WOO! Brandon Graham, Farel Dalrymple, Joseph Bergin III and myself will all be squatting at the same table (Table A-04), so if you're in Seattle in two weeks time, come on down and say hi!

Sounds like my kind of show. Have fun and get inspired :)