I know i neglect this space (i'm a tumblr man now, sadly) but i have an announcement - I'll be tabling with Brandon Graham this year at Emerald City Comicon in Seattle! We'll be sitting at table Y-12, with this shiny new print (colored of course)! 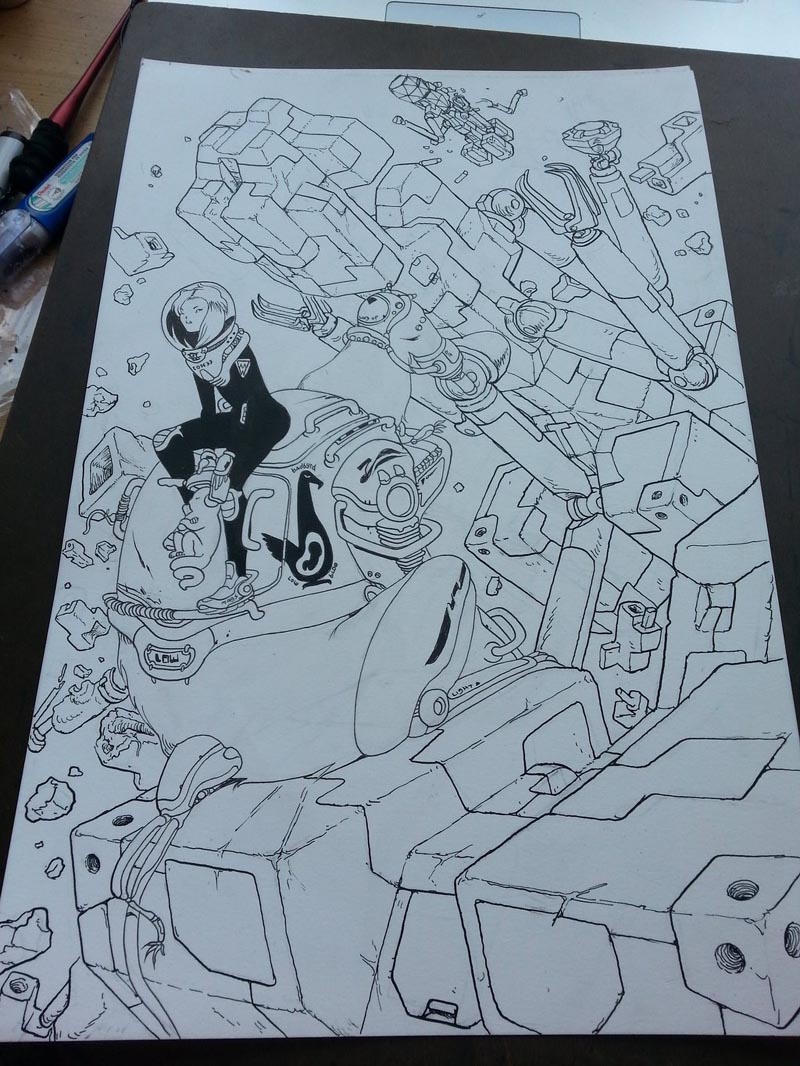 How Dinosaurs Can fix your Religion

Today, we have a guest post from my amigo and editor Daniel Bensen! His wise words, below the image... There comes a time in every spec-fic writer's life when they must take a good long at themselves and think: "is this novel I've written nothing but a vehicle for my made-up culture?"
You bet it is! I was working on a lost time-colony of bronze-age humans in the Late Cretaceous period for ages before I finally figured out how to work them into a novel about intercultural romance and the difference between power and strength (buy it here!) I had the whole shebang: languages, population genetics, rituals, and of course religion. Ahem.
The people on the timeline called "Maastrichtia" are most likely the descendants of an apocalyptic cult that stole a time machine and went back to the time of the Chixulub Impact about 65 million years ago. It's that "about" that turned out to be the problem. Their time machine was only accurate to a margin of error of .01 million years, and it dumped them out more than five thousand years before the impact.
In the subsequent millennia, most vestiges of the cultists original religion have vanished. The Maastrichtians have adopted a number of belief systems, most only vaguely Abrahamic.
The Ethlek tribes who herd triceratops around the alluvial plains at the site of the first colony believe their land itself is God. To the west are the forested hills of God's Brows and to the east the sea, his eye. He sends his angels up to live on his face as humans, animals, plants, and some natural features. This monotheism evolving into animism by way of reincarnation and ancestor-worship is common on Maastrichtia.
The Memorialist church of the polar sea civilizations has a conservative approach. They believe God left the universe in the charge of angels, many of which forgot their duties and became demons. Demons control the destructive storm or the hungry mosasaur, but angels live in reliquaries and may be made to do work. Some reliquaries are called radios, others steam engines or arc lights. These miracles are kept, maintained, and very rarely reproduced by the priesthood, their secrets hidden lest they become corrupted and turn into demons. In the Thalassocracy on the north coast of North America, Memorialist dogma exists side-by-side with an animist tradition where totem animals and nature spirits patronize social organizations like warrior societies (ankylosaur, mosasaur, etc) priestly orders (troodon etc) and political parties (magnolia etc).
When confronted by time travelers from the 21st century, the Memorialists look at high-tech soldiers and think, "powerful entities we must enslave lest they become demons." The Ethlek think, "Aha. An opportunity!"

Blurb:
Groom of the Tyrannosaur Queen (http://www.amazon.com/gp/product/B018UD6DH2/ ) is a time-travel romance with dinosaurs, available now as a kindle book.
Back-of-the book information:
Former soldier Andrea Herrera isn’t happy with where her life’s taken her. Specifically, to Hell Creek, Montana, 65 million years before the present. As far as careers go, making sure the dinosaurs don’t eat her paleontologist clients comes in a pretty dismal second choice to serving her country. But when their time machine malfunctions, Andrea and her team are trapped in a timeline that shouldn’t exist with something a hell of a lot more dangerous than terrible lizards: other humans.
Links:
Dan's website (http://www.thekingdomsofevil.com/?page_id=1884 )
Amazon (http://www.amazon.com/gp/product/B018UD6DH2/ )
Goodreads (https://www.goodreads.com/book/show/28007296-groom-of-the-tyrannosaur-queen )
TV Tropes (http://tvtropes.org/pmwiki/pmwiki.php/Literature/GroomOfTheTyrannosaurQueen )
Tumblr (http://www.tyrannosaurqueen.tumblr.com/ )
Facebook (https://www.facebook.com/The-Kingdoms-of-Evil-218960014786258/  )
Twitter (https://twitter.com/Evil0Dan )
Deviant Art (http://bensen-daniel.deviantart.com/ )
Posted by Simon at 2:30 PM No comments: