homo neanderthalensis
Originally uploaded by povorot
Peep the technique.
Posted by Simon at 12:02 AM 1 comment:

Al-Khattab and the Jinn

I just did this doodle today, which I ended up really liking. Islamic mythology has a bunch of little gems like the djinn, a race of ethereal beings god made from smokeless fire the same way he did with earth for mankind. There are all types of djinn, too, including the Ghul, which lures men into the desert to devour them (among other things - they like eating the dead as well). I just wanted to play with the visuals you could get from a race crafted from "smokeless fire". Apparently, living in lamps and granting wishes isn't standard practice for the djinn, either. Just a few specific exceptions.
Posted by Simon at 5:04 PM 3 comments:

A page in progress (below). 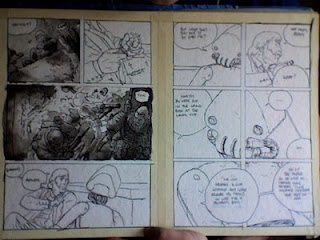 (Edit - All fourteen are up! Inking on the last six has begun!)
I've only got about six pages left to draw for "Jan and Anders", which I'm very excited about. Over the week, I'll be scanning in the next fourteen pages of the story (out of about fifty).
Posted by Simon at 1:57 PM No comments: