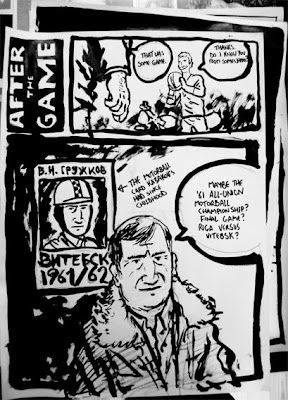 Actually called "Мотобол" in Russian (Motoball or Motorball in European languages), this is a HELLA tight game where guys play soccer on dirt bikes and there are tons of crashes. This was a few pages (badly photographed) of a comic I lost interest in and put directly onto paper from my mind - no planning, no nuthin'. And now it's here for you!
And it's the last thing I'll be posting for at least seven weeks, as on Saturday, I will be flying to Kiev for a vacation/adventure!! (Five Weeks Study in Ukraine, then Brussels-Amsterdam-Berlin over two weeks)
Which means I'm leavin' the store in Peter's capable hands. He should have a video up for us all very soon....
Posted by Simon at 8:04 PM

Email ThisBlogThis!Share to TwitterShare to FacebookShare to Pinterest
Labels: comics